A co-operative set up to purchase a village pub in Coverdale has now achieved the first part of their aim and bought the premises and is now on the look out for a tenant. The Foresters Arms public house in Carlton has now been bought by the Coverdale Community Pub Co-operative for the price of £235,000.

Set up following its closure in January this year, the community group held a series of public meetings in order to invite members to pledge cash for the community purchase of the pub. With no trouble attracting sufficient support in June the Community Pub Co-operative had their offer for the premises accepted by the previous owners. They then set about the task of converting the pledges received into cash. This was done with time to spare and contracts were exchanged. Final completion took place on Thursday July 14th and the pub is now under new management.

Last Sunday the management committe opened the pub for the new owners to inspect the premises. A steady stream of both existing and potential investors came along to inspect their new ?buy? and ask questions concerning the next stage towards the opening of the pub. The co-operative needs a further £100,000 in order to bring the premises up to a standard suitable for business as a going concern.

Local resident Tony Keates an investor in the premises was on hand to look round the Foresters Arms at the open afternoon. He said,? I want the pub to re-open. As a member of CMRA I am passionate about beer. It is a really nice country pub and it is only right that it is re-opened.? In an encouraging sign having looked around the premises several visitors got out their chequebooks and invested there and then. There are also investors from both Belgium and the USA who whilst on holiday heard of the plight.

Chair of Coverdale Community Pub Ltd Management Committee Mr. Raymond Brown said,? We are delighted to have bought the premises. However our next priority is to recruit the right tenant. We also need to raise the cash to complete renovations to the building and bar. If we are going to keep to our plan to re-open the pub by Christmas, just five months away, we have to start work as soon as possible. ? The grade one listed building still appears in good condition, however the previous owners plans to convert part of the premises into accommodation is slightly at odds with the new owners vision.

The management committee is now busy preparing plans for the renovation and recruitment of a tenant. The pub will be need re-furbishing and re-equipping ready for someone to start business. Their plans are for a fully working commercial kitchen as once open the pub intends to serve meals. The main problem is access between the dining area, the bar and kitchen. The tenancy comes with full living accommodation comprising lounge, kitchen, bathroom, and two bedrooms. The pub also has three double rooms and ensuite facilities for the tenant to offer as bed and breakfast.

Applications for potential tenants can be made through the website www.coverdalecommunitypub.co.uk. The closing date is August 12th 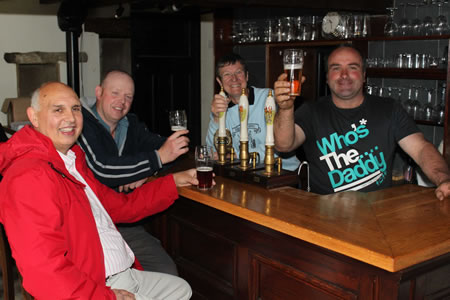 The organising committee trying to buy a community pub is urging people who have pledged support, to invest cash as the deadline for a bid draws nearer.

With less than a week until contracts are to be exchanged for the Foresters Arms, Carlton in Coverdale, the community pub co-operative has raised £160,000 in cash. Following a public meeting, prospective members initially came forward very quickly to invest with £105,000 in the bank after the first week. This is still short of the purchase price.

However, Raymond Brown, Chairman of the management committee, said: " I cannot emphasise enough the urgency there is to turn the pledges of support previously given to us into share applications. We are so close to achieving the first step of our goal, buying the pub. We now have just days to reach our initial target."

The community pub co-operative has until Thursday to raise the cash, and exchange contracts, with a completion date of August 18th. They then have a further amount to find to pay for renovations necessary to open the premises.

Mr Brown added: "If everyone acts soon to return their share application forms, we will all be sitting in the Foresters Arms by Christmas toasting our success."

For further information, or to view or download an application for shares, please visit the pub website www.coverdalecommunitypub.co.uk

Get out your chequebooks!

Published in the Darlington and Stockton Times Friday 10th June 2011

A proposed community run pub in Carlton has moved a step closer with an offer to buy the premises being accepted by the building’s owners.

Following an application to the FSA the Coverdale Community Pub Co-operative is now in place. The group who wish to purchase the Foresters Arms in Carlton have announced that their offer to the owners of the now closed pub to has been accepted.

Spokesman for the Coverdale Community Pub Management Committee Peter Pearson said “It is good news that our offer has been accepted but there is a great deal of work still to do.”

The group have worked hard to obtain pledges and took advantage of two popular events in the area; the Stables open day at Middleham on Good Friday and the Festival of Food and Drink. The Community Pub Co-operative was able to raise awareness of their quest, and obtain a significant number of further pledges.

Mr Pearson continued "Speed is now of the essence as we have to convert the pledges already made to us into funds in order that we can complete the purchase. We also have to continue to gain more support in order to raise enough money to complete the renovations and re-open the pub."

"There is a lot of information about the way forward that needs to be understood and although we will shortly be making available a comprehensive Opportunity Document that will describe everything in detail, we think that it would be very useful to meet to discuss the issues. “

Interested parties are invited to a meeting on Thursday (June 16th), in the Coverdale Memorial Hall at Carlton, at 8pm.The management committee will present their proposals regarding the way in which they intend to purchase, renovate, and operate the pub.

The Community Pub Co-operative have not yet raised enough money in pledges to reach their target of £300,000 and are looking for further support. Anyone interested in becoming involved and to pledge support or read the newsletters should visit www.coverdalecommunitypub.co.uk.