The Foresters Arms - A short history!

The following background information is taken from documents submitted to the Yorkshire Dales National Park Authority in a recent building consent application. This history is based on oral information from the current owner and others used as part of the application.
The Foresters Arms is named from the Coverdale Forester's Friendly Society, formed in 1816 as the Banks of Cover branch of the Ancient Order of Foresters, although the branch later broke away. Every other summer the Foresters March is still led by a band in procession.

Use of the building as a pub or Inn
The building has been in use as a pub or inn throughout the 19th and 20th centuries, and may indeed have been an inn in the 18th century.

Throughout much of the 19th century the census enumeration returns (1841-1891) support the view that the publican was William Walls.

in 1901 the publican was William's son Joseph. By the time of the 1910 land tax the pub had been sold to Theakston's and the occupier was S.R.Bellamy.

The earliest mention of it, found to date, is in the John Bowes autobiography (Joynes p212 and p309).
John Bowes records a meeting of Methodists in 1817 in "Mr Walls" long room -

This is a strikingly similar description to that being used in 1863 see below
the Mr Walls mentioned here must be an earlier Mr Walls from the William Walls who was licencee later in the century. Perhaps this may have been William Walls' father?
In 1849 Tithe Awards lists it as a public house and outbuildings. Owner William Lightfoot and tenant William Walls.

1910 - The Walls must have bought the property at some time as the 1910 land tax surveyor's book records the owner and occupier as Joseph Walls - but that it has been sold (presumably during the valuation process) to Theakston's and the 'present' occupier S.R.Bellamy "has been in 10 days"

Sources for the structure of the building itself are:

maps 6" OS map 1856; Tithe Award map 1849; Valuation map 1910. 25" OS map
1910 valuation surveyors field book
early 20th century photograph
the evidence of a long room 1817 - from John Bowes
evidence of a long room Henry Constantine in 1863
Foresters Arms Mr Walls' Long Room as it was named in the 19th century
Local information suggests that the long room was in use in the 20th century for wedding receptions etc. and for Foresters Friendly Society meetings. It was converted into bedrooms in the 1980's. It is not certain where the long room was located in the building other than oral evidence indicates it was at first floor level. It may have been situated on the north end of the building above the present restaurant.

Baines directory of Yorkshire names William Wallis - this must be an error for Walls - as innkeeper of the Hare & Hounds
First edition of the 6" to 1 mile map 1856 - it is named the Board
It is not clear at what point it was named the Foresters Arms - though directory entries suggest it was before 1880. It has retained this name to today.
Presumably it was named the Foresters Arms because of the potential trade from having the regular Friendly Society meetings on the premises.

(N.B. there were other pubs in the village - notably the Moorcock - which functioned throughout the 19th century and until the 1960's. There was also at times an inn in the house known currently as Seaton House)

There is evidence of Mr.Walls as innkeeper in 1817
1841 census William Walls aged 30 innkeeper - so the above Mr Walls must be his relative - father?
1851-1891 each census return gives William Walls and Ann his wife getting 10 years older each time
In 1901 Joseh Walls aged 64 is innkeeper - he is the son of the above.
Further information on the Foresters room or 'Mr Walls Long Room' at the Foresters Arms
Mrs Alderson, an elderly lady who lived in the Foresters in the 1950's - her parents were the Licencees. In her time the pub was possibly unchanged from it's state in the 19th century; She has some fairly clear memories of the layout.

She seems to remember that the long room lay east-west along the north side of the western part of the building on the first floor. There was a fireplace in the centre of the north wall. On the south side 'behind' the long room were two small bedrooms. Underneath part of the room was a stable with stone walls.

20th Century
It was used in the 20th century for wedding receptions and Foresters Friendly Society meetings - people remember it in use in the 1960's and 1970's. This room seems to have been altered in the 1980's when it seems to have been changed into bedrooms in the western end of the Foresters. The memory is of it being situated at the NW side of the building running E-W.

19th Century
There are two references in this period. John Bowes Autobiography quotes in Joynes thesis pages 212 and 309 John Bowes spent his life as a methodist preacher and he remembers being convinced of his faith in a methodist meeting in 1817 in "Mr Walls Long Room" in Carlton

Henry Constantine ( the self-styled Coverdale Bard) writes in his volume Rural Poetry and Prose Volume 11 1867. He tells of celebrations in Carlton in honour of the wedding of Edward Prince of Wales and the Princess of Denmark in 1863. Amongst other jollifications - 400 people enjoyed a banquet then they "assembled again in Mr Walls Long Room and began the ball" (presumably not all 400 of them!!) 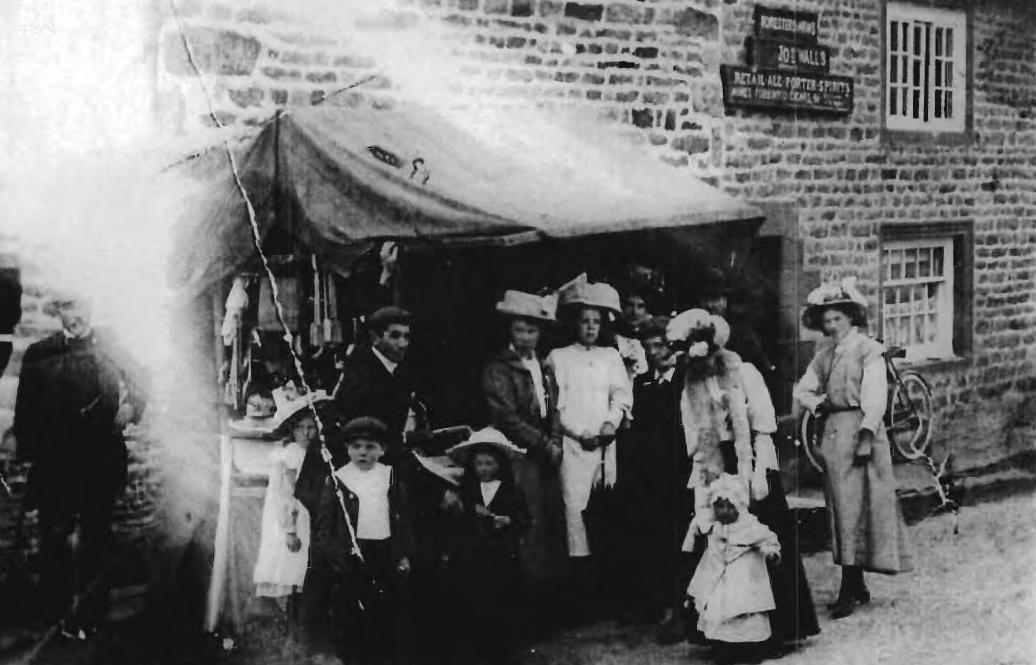 The names of the people in the picture are not known. Jos Walls (is named on the inn sign) sold the pub to Theakston's in 1910. He took it over from his father (William) some time in the 1890's. As a consequence of this information, it is concluded that the photograph was taken in the early 20th century. It could be after 1910 - depending on how quickly Theakston changed signs!